Hot off the back of his sold-out concert at the prestigious Madison Square Garden in New York City, and his stellar closing performance at the Billboard Music Awards, Burna Boy announces the dates for his Love, Damini summer 2022 tour.

The tour will see the acclaimed African Giant touchdown in nine cities in the United States, Canada, and Barbados. The tour will commence on the 17th day of July in Barbados, Burna Boy will then proceed to the United States where he’ll make stops at Detroit, Minneapolis, Chicago, and several other cities, including Montreal in Canada.

The tickets for the Love, Damini summer 2022 tour will be made available on May, 20 via Burna Boy’s official website. 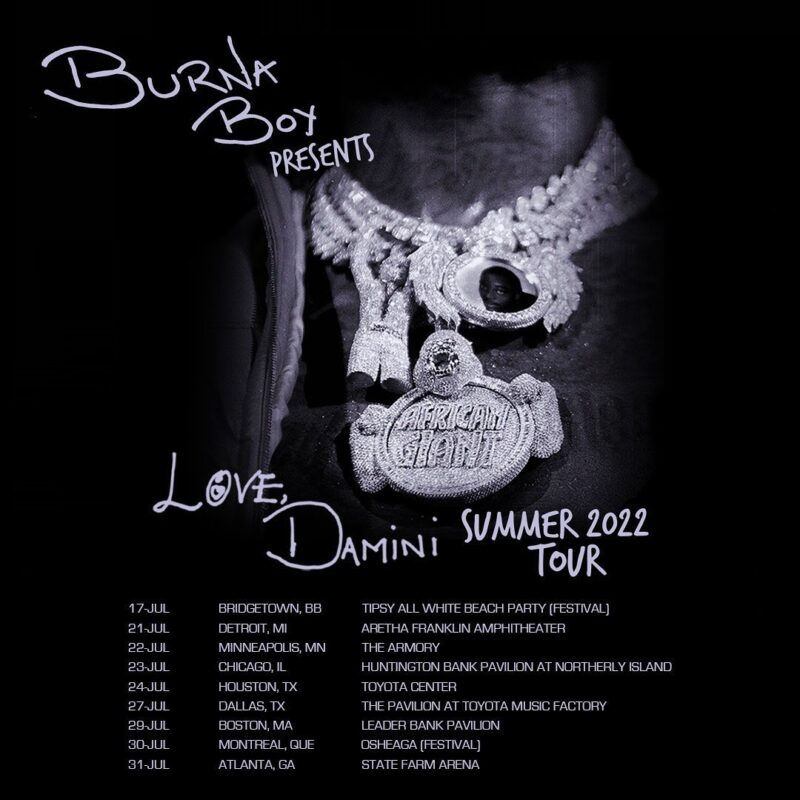 Burna Boy has been on a roll in recent years, since he made his reinstatement as the African Giant with the hit single ‘Ye‘ back in 2018, Burna Boy’s growth has been nothing short of an astronomical success. He returned to the game after some setbacks prior to 2018, ready to showcase his skills while having a good time, as he did on his omnivorous studio albums ‘Outside‘, ‘African Giant‘, and the Grammy-winning ‘Twice as Tall‘, emerging as one of the poster boys of Afrobeats, breaking new grounds for African music in general.

In addition to the forthcoming tour, Burna Boy has previously headlined successful concerts at the Madison Square Garden in New York City, Accor Arena in Paris, Ziggo Dome in Amsterdam, Rotterdam Ahoy in Rotterdam, 3Arena in Dublin, Wembley Arena in London, SEG Geneva Arena in Arena, Hovet Arena in Stockholm, 02 Arena in London, Partille Arena in Partille, Jahrhunderthalle in Frankfurt amongst many others.

It’s never a dull moment with the African Giant.