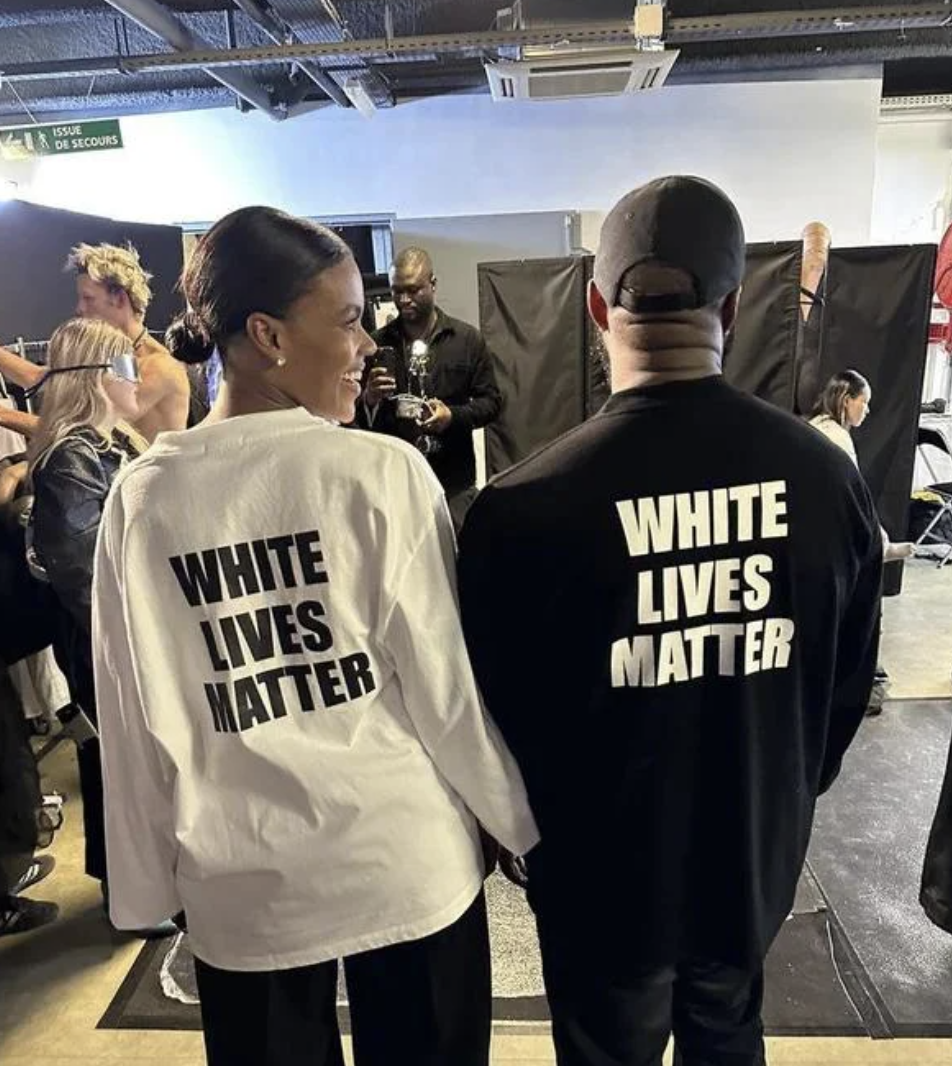 Before the Yeezy Season 9 show started, Ye confronted the audience with tense words: “Everyone here knows that I am the leader … you can’t manage me. This is an unmanageable situation.”

He mentioned even more tense topics: his ex-wife Kim Kardashian’s robbery in Paris in 2016, his manager Scooter Braun, and his falling out with Gap.

What made headlines was how he and several models in the show wore shirts with the sling “White Lives Matter,” including a now infamous picture of him posing with Candace Owens, both donning the shirts.

In the words of Rebecca Barnette, White Lives Matter co-founder and Women’s Division leader of the National Socialist Movement:

“What happens to blacks in this country at the hand of law enforcement is none of our concern … other than to prepare to restore order and rebuild our neighborhood taking back our lands one community at a time.”

“When the enemy destroys … we guard our town borders and make our homes white and great again.”

For more context, his collaborations with Gap and Adidas ended abruptly.

After a controversial collaboration with Gap, where the clothes were delivered from trash bins as an artistic choice, Ye severed his two-year partnership with the brand and stated how the store failed to meet the terms of the contract.

Calling Ye’s behavior problematic would be an understatement in this situation.

Vogue editor Gabriella Karefa-Johnson expressed her concerns about the situation through an Instagram story screenshotting a conversation.

She stated how she felt Ye didn’t understand the difference between appropriating BLM and subverting the Make America Great Again hat.

She understood that the idea was that the hat was readymade and that when worn by Trump (or a stand-in white supremacist), it’s racist, but when worn by Kanye, it’s about liberation.

She explained that Ye was trying to illustrate a dystopian world in the future when whiteness would be discriminated.

More specifically, Ye was wearing an oversize shirt with a picture of Pope John Paul II and the words “Seguiremos tu ejemplo” (“We will follow your example”) on the front and the WLM slogan on the back.

Despite her explanations, Karefa-Johnson thought it was indefensible behavior. Jaden Smith, Dazed writer and editor Lynette Nylander walked out of the audience.

As did Jason Lee, CEO, and editor-in-chief of Hollywood Unlocked.

This prompted Kanye to attack Gabriella in several Instagram posts, calling her not a fashion person. Gabriella is friends with Gigi Hadid, and Hadid took to Instagram to defend her friend.

“You wish u had a percentage of her intellect. You have no idea haha…”

Vogue made an official statement standing with Gabriella Karefa-Johnson, supporting her and saying how it’s unacceptable that she was targeted and bullied.

Kanye West was lambasted for selling the Yeezy Gap collection in trash bags.