The top 8 Hip-Hop albums of the year so far 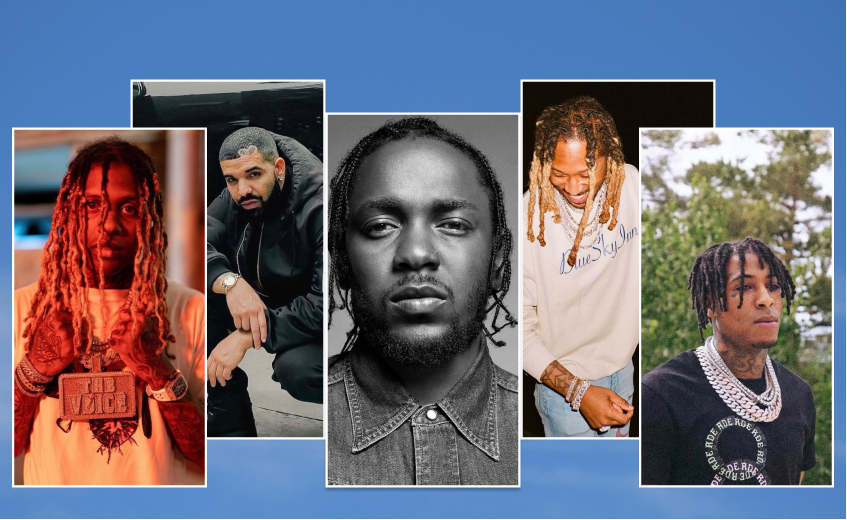 Only halfway through 2022 and it has been an amazing year for hip-hop so far. After a four-year hiatus, the Compton MC, Kendrick Lamar returned with one of the best albums of the year yet, Pusha T followed up his fan favourite 2018 Daytona with a near immaculate collection of straightforward rap songs, a long-awaited album from Future, a follow up to Drake’s 2021 album, Certified Lover Boy and drill specialist, Fivio Foreign’s debut album.

As we kick off the second half of the year, we’ve compiled a list of some of the best hip-hop albums released so far.

When Kendrick Lamar announced the release date of his long-awaited fifth album, the streets went wilding. As just expected, the album lived up to Kendrick’s standards, although it was met with mixed reviews. On the other hand, Kendrick triggered a social media frenzy due to the level of artistry displayed on the album.

Kendrick Lamar being a giddy dramatist, Mr Morale & The Big Steppers is packed with perspectives personifying his many characters and muses with distinct voices, cadences and beat switches that bring the album to life. He opens with a brutal confession on United in Grief, “I’ve been going through something.” The concise statement transcends into hardcore rap and then fast drum rolls as he says, “I grieve different,” cutting through the intrigue surrounding his artistic disappearance.

The first track sets the precedence of the album as he explains the things that have plagued his mind during his break from the spotlight over other songs like We Cry Together with Taylour Paige, Die Hard featuring BLXST and Amanda Reifer, Silent Hill featuring Kodak Black and more.

What makes Kendrick Lamar’s Mr Morale & The Big Steppers special is the way he uses intense vulnerability combined with funk, jazz, soul compositions and hardcore rap to show the uncomfortable things that have been churning him over the last decade. This vulnerability fused with his lyrical ability and artistic delivery is what gives listeners the opportunity to connect with this album.

Future – I Never Liked You

Future’s commitment to being the “Toxic King” arguably is one of the factors that sell his brand and escalates his numbers. I Never Liked You is a follow-up to his unofficial “toxic masculinity status” as he raps about abandoning women and having casual sex with random females. No doubt, a lot of people claim to be against the toxic masculinity and misogynistic status quo, but we are going to agree that there is a growing number of people on social media saying things like “f*ck love, money over b*tches” and the likes. This is one of the reasons this album is a fan favourite. Not denying his slick rap abilities and vocals that make his songs fun even when the lyrics feel routine.

The Album starts off with 712PM where he raps about scheming to sell drugs with his crew at the back of a luxurious vehicle. He references his ability to turn the average girl into a pop star on I’m That N*gga. Drake makes two appearances on Wait For U and I’m On One where they recite the same stories of one-night stands and drug-filled nights.

One of the best songs on the album is Wait For U featuring Drake and Nigerian singer, Tems as they slow down the melody to deliver a heartfelt track that revolves around a twisted relationship and drug abuse.

Pusha T’s 2018 album Daytona may have been considered the apex of the Virginia rapper’s career but on It’s Almost Dry, Pusha T has raised the bar further with 12 tracks of braggadocio rap by exemplary productions from two great hip-hop producers, Kanye West and Pharrell Williams, producing an instant hip-hop classic.

The opening track, Brambleton addresses his fractious relationship with his former manager, Anthony ‘Geezy’ Gonzales, setting the tone for a deeply personal project as the 44-year-old rapper discusses being a new father while still finding countless ways to invoke drug dealing. Appearances from Jayz and Pharell Williams on Neck & Wrist, Kanye and Kid Cudi on Rock n’ Roll and Malice on the emotional Pray for You make the album stand out as a polished gift delivered from Pusha T to listeners.

In all, It’s Almost Dry is a good rap album that delivers some hard-hitting tracks, great production and bar-to-bar excellence from one of the best rappers in the game.

Gunna likes to rap about fly shit, punched up by spontaneous flow and melody switch-ups that seem minor the first time, until days later when they’re still on your mind. While Gunna’s third studio album DS4EVER is like his past work in some ways, there are key moments of vulnerability paired with the usual bravado that hint at Gunna’s evolution as a person and artist. Although he displays his constant drip, he doesn’t shy away from lamenting over the times when life’s tidal waves nearly drowned him.

The introspective Turbo and McNab produced Livin Wild sees him talk about his pneumonia experience in July 2021 over a sombre mid-tempo beat, highlighting the severity of the situation. Missing Me covers matters of the heart and the desire to be believed in and seen, reminding himself that he’s a star.

What makes DS4EVER remarkable is the in-depth storytelling and the all-star roster of producers like Young Wheezy, Mike Will, Dez Wright, Ambezza, Charlie Handsome and more.

When YoungBoy is at his best, he raps as if each thought is occurring at the moment as he says it but even when he sounds like he’s on autopilot, his songs have shocking revelations and incredible stakes. This is what he employs on the 19-track album, COLORS.

One thing to note in this album is his constant talk about death and his readiness for when it occurs. In recent times, most rappers talk about death in line with their struggle with depression, but YoungBoy is able to show his willfulness to accept what seems like the most definite reality. NBA Young boy shows some sexual and romantic side on records like 2Hoo, DC Marvel and Expensive Taste. On Know I Like You, he seems to be heavy with the beats as he easily disses NLE Choppa for takings sides with Lil Durk.

The way YoungBoy is able to alternate between stick talk raps, sex and love ballads, street disses, and self-reflection is what makes this body of work a favourite.

Fivio Foreign has emerged as New York’s drill star since his 2019 hit, Big Drip which had artists like Ye (Kanye West) taking an interest in him and featuring him on his 2021 Donda having said that he reminded him of his younger self.

Fivio came back with B.I.B.L.E to thrill listeners and remind them that his breakout hit was not a fluke. In the stellar opening, On God sees biblical inspiration meet a captivating chorus over an ethereal instrument we hear some of Fivio’s greatest bars to date. He teams up with Migos’ Quavo for an energetic collaboration on Through The Fire and Ne-Yo on Love Songs.

Fivio Foreign’s delivery remains visible throughout the album proving that with a few inspired beats, he can produce utter greatness.

For over half a decade, Drake has found himself stuck in a cycle of constantly trying to make albums that appeal to both his rap fans and his pop and R&B fans. Honestly, Nevermind is his first project in years where he made something entirely for himself, instead of catering to each faction of his massive fanbase. Rather than attempt to make all of his hip-hop fans happy, he made a dance album for dimly lit clubs, and we definitely love to see this laidback part of Drake.

Honestly, Nevermind is a dance record where he only raps on two songs: Liability and Jimmy Cooks. On projects like More Life, he tapped into the Caribbean culture, utilizing dancehall and Soca. Calling My Name is one of the songs that most effectively captures Drake’s vocal and lyrical ability while also keeping the production at center stage.

Even though Honestly, Nevermind is a dance album, you can still sense Drake’s inherent lyrical abilities and hip-hop background.

When Lil Durk releases an album, you generally know what you’re getting from him. The Chicago star is going to provide earworm melodies, impassioned bars, and street talk with the best to do it. 7220 has all of these but this time, it’s laced with family history, naming the project after his grandma’s residence and revealing new sides of his history.

The album shows off Lil Dutk as a complex and colourful writer as he uses melancholy-backed piano instrumentals to embrace his vulnerable side and describe situations.