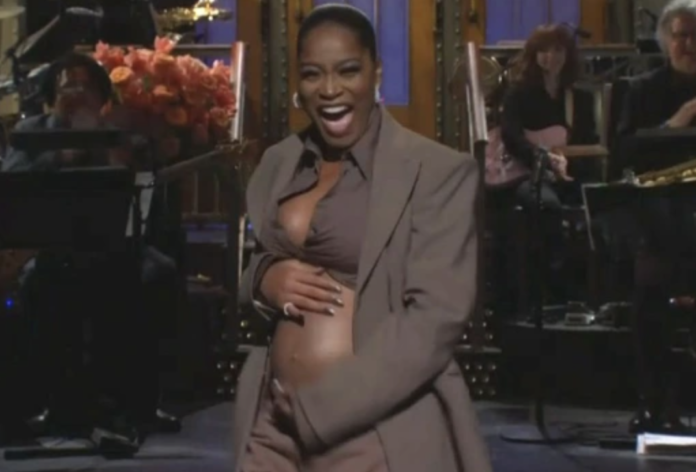 During her SNL monologue and pregnancy reveal, Palmer wore a chocolate brown blazer which she unbuttoned to reveal her growing bump.

Perhaps her delivery of the news was the most iconic part of her participation.

“You know, I gotta say though. It is bad when people on the internet spread rumors about you y’all, but it’s even worse when they’re correct. But honestly this has been the biggest blessing, and I am so excited guys – I’m gonna be a mom!”

Palmer also went on Instagram to talk about her hosting Saturday Night Live.

“I had such an amazing time hosting SNL! Truly such a unique experience, I learned so much. The cast was incredible, I was so happy to be taken into their home for such a short time.”

Palmer expressed her gratitude for the events happening in her personal life this year, especially with her pregnancy.

She thanked God, her parents, her family, and her “other half” for bringing her the things that only true unity can provide.

“Love is all we have isn’t it, you do nothing in this world alone and trust me, I am not alone! Very grateful… Happy Holidays.”

What a wholesome message to express in December. Palmer gained popularity in September after the release of western sci-fi horror Nope, by Jordan Peele, where she played Emerald.

Darius Jackson, also Darius Dalton, captioned “2023” and a heart emoji in Instagram Stories, taking a picture of Keke Palmer with her baby bump in a brown sweater dress.

Palmer is known for playing leading roles on stage and screen, earning her a Primetime Emmy Award, five NAACP Image Awards, and nominations for a Daytime Emmy Award, and a Screen Actors Guild Award.

She was included in Time magazine’s list of the most influential people in the world in 2019.

Fans on Twitter received the news happily and congratulated Palmer on her pregnancy.

“She is going to be the coolest mom hands down. She just radiates such light & joy.”

“I saw the news, and was like I gotta come on here and celebrate with others lol. I love her and am so happy for her.”

Gen Z, in particular, saw Palmer grow up as True Jackson VP when they were kids. Now, she’s all grown up with a baby, a husband, and a successful career.

The “getting older” sentiment is there for many, but in a good way and expressing much love to Palmer.