HomeFeaturesQuislaona is the newest Dominican fantasy anthology of 2022
Features

Quislaona is the newest Dominican fantasy anthology of 2022 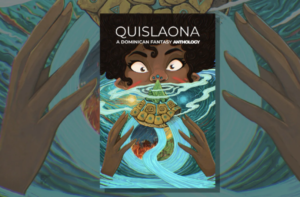 Speculative fiction is one of the least explored genres in Dominican literature, but Quislaona aims to shake up the space by bringing together an anthology of Dominican fantasy and sci-fi short stories.

I interviewed their editor, Zaivy, and she kindly provided me with a teaser on what’s to come and their superb world-building that draws inspiration from Dominican folklore and cultural roots.

The objective of Quislaona is to promote Dominican speculative fiction authors and create a space for Dominican authors to explore fantasy and sci-fi.

The island of Hispaniola, the Caribbean island where the real-world location of the Dominican Republic and Haiti, serves as the primary inspiration for the setting in the stories of Quislaona. They wanted to create a secondary world with similar attributes to La Hispaniola.

The stories and comics in the anthology span a huge timeline, starting with the initial formation of the island and finishing when hover trains exist.

Magic in Quislaona exists everywhere: radiating off the stones and resin of the island and is inherent in the water.

What’s interesting is how Quislaona began as a simple idea during a six-week writing workshop by a team of authors that eventually evolved into a lore bible and anthology with over sixteen short stories, comics, and a fundraiser page, which you can support here.

Quislaona’s worldbuilding hints at monotheism, a large Taíno influence, and voodoo elements of the landscape, fauna, and flora that take from Hispaniola, such as the sugar cane flower.

They created some creatures that don’t originate in the Dominican Republic, such as the Huroni, a ferret-inspired creature.

The political structure takes elements from the Taíno civilization: the kasikes are the island leaders, and the regions are split into cacicazgos, just like the real-life Taíno.

There are merfolk, ciguapa, Huroni, humans, and Travelers. Uniquely, in Quislaona, humans form in coconut shells instead of the mundane birthing process.

Many of the tales in the anthology are optimistic and present a semi-topic society, with others taking a darker, cynical turn. There are as many stories with themes of love and family as there are of hardship and betrayal.

They don’t have an anticipated date for publishing yet, but they aim to have all the copies sent before the end of 2022.

As per Zaivy’s own words, they wanted to create the kind of space Oscar Wao would have loved to write in, despite working on an indie project with a small team. They want to promote a space where Dominican writers can experiment with speculative fiction.

Zaivy’s background is in world-building, and she volunteers for Worldbuilding Magazine, where she was recently elected as secretary of the board of directors.

Quislaona has reached 61% of its $6,000 funding goal. It’ll feature four B&W comics and sixteen prose pieces that explore their setting.

The print edition is a 6×9 perfect bound book with a cover illustrated by artist Eddaviel. Most notably, the stories are in English and include Spanglish, though two of their comics are Spanish.

The project is a collaboration between three indie organizations: the Dominican Writers Association, the Worldbuilding Society, and Cultura Cómic RD.