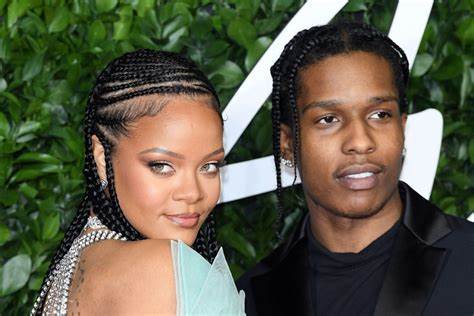 When you’re a celebrity and have kids, you usually have two choices: making them a public part of your family or keeping things low-key.

And keeping things low-key is what singer Rihanna and A$AP Rocky  are doing with their baby. They welcomed their little boy in May.

Rihanna is a billionaire singer and known as America’s youngest self-made billionaire, with a juicy top spot on the Forbes’ 2022 list.

Privacy is an important value for the couple and has become a thing of the past in modern times, especially when you’re a celebrity.

Rihanna set trends in maternity fashion during her high-profile pregnancy, so, understandably, she wants to set some boundaries regarding paparazzis and spending time with her child during the most difficult months of parenting.

Ever since they became parents, the pair has only been spotted only a couple of times. The first time was at a barbershop in London in early July, where Rocky was just getting a new haircut.

She was also seen later in July, arriving for ASAP’s set at the Lollapalooza Music Festival in Paris and spotted in New York City.

The last time they were seen before the announcement was enjoying a chic date night at NYC hot spot Carbone in late July.

Rocky and Rihanna are considered a power couple in the celebrity world. They were longtime friends and made their romance official in 2020 after months of being at each other’s side in public. She revealed her pregnancy on January 31, 2022.

Ever since, she was considered an icon of fashion in pregnancy and motherhood.

Who else other than RiRi could rock a pink coat with jewelry along with a baby bump?

Rihanna was photographed debuting her baby in January and took several pictures attending high-profile events such as the red carpet, the Oscar Gold Party, and dates in New York with her bump.

She attended the red carpet and spoke to ET about her maternity fashion and her enjoyment of her stage in life.

In some ways, fashion, beauty, and pregnancy also made her feel more confident in her womanhood. “Right now, being pregnant, some days you just were like ‘Ugh, I just want to lay here on this couch all day,’’ But when you put on a little face and a little lipstick, you transform.”

Of course, her must-haves are all from her Fenty Beauty line. She uses the Gloss Bomb and keeps herself moisturized from head to toe at all times.

She also opened up in other interviews about her music career, despite keeping it slightly paused to focus on her pregnancy. A$AP Rocky  mentioned how he’s also been enjoying the process of fatherhood so far.

She mentioned several times how she would be an overprotective mom once the baby was born. “You talk about my kids, and it’s over.”