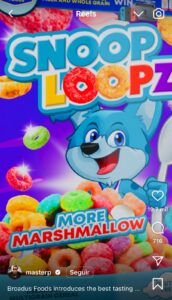 Snoop Dogg is dropping his brand of cereal: Snoop Loops. This gluten-free multigrain product will be produced by Snoop Dogg’s company Broads Foods.

They posted an Instagram Reels with the caption: “Broadus Foods introduces the best tasting cereal in the game: Snoop Loopz.”

“@snoopdogg we’re taking over the grocery stores. Snooploopz.com. The more we make the more we give. #GODisgood #familybusiness Berry delicious Fo Shizzle!”

Master P worked with Snoop on a product under his Rap Snacks brand. The cereal comes in a box and features a furry animal with a spoon that hovers over a bowl.

What’s funny is how some users shared memes in social media suggesting that Snoop Dogg should make a cereal and call it Snoop Loops back in 2017.

Master P mentioned how one could imagine gluten-free From Loops, with more corn, more marshmallows and more flavor.

It contains more Vitamin D and fiber, which makes it a nutritious breakfast meal that appeals to Snoop Dogg fans of all ages.

Broadus Foods also has other products, such as oatmeal grits, syrup and pancake mix.

With this announcement, Snoop Dogg is now part of a group of rappers who also have their own cereal brands.

The trend became mainstream when Travis Scott collaborated with Reese’s Puffs to create a LaFlame branded launch back in 2019, and in that same year, Lil Durk announced the release of his DurkiO’s cereal with SoFlo Snacks.

The difference with Snoop Dogg is that he’s the owner of the company producing the cereal and has also been associated with the food industry for a long time now.

On his part, Master P has experimented with the food industry through his line of energy drinks, chips, ramen noodles, cereal, pancakes and other related products.

Snoop Dogg also launched a new wine through his 19 Crimes brand with Martha Stewart, Martha’s Chard. This is a California Chardonnay and the third Californian wine in his collection, along with Snoop Cali Red and Snoop Cali Rosé.

Snoop Dogg has expanded his entrepreneurial ventures to the Web3 and NFT space through his crypto persona, Cozomo de’ Medici, an avid NFT influencer and collector who outed himself on Twitter back in September 2021.