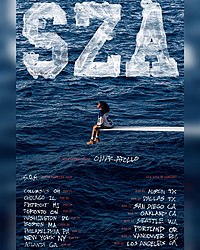 Beyoncé’s Renaissance was a before-and-after of 2022, but SZA’s hottest SOS has managed to surpass even that.

SOS has eclectic sounds, SZAs, mesmerizing vocals, and some really deep lyrics. If you’ve seen its album artwork, you might also know that it’s inspired by a paparazzi foto of Diana, Princess of Wales.

SZA mentioned how she felt that the Diana reference was the most accurate representation of how she felt while recording the album.

She wanted to transmit isolation. Funnily enough, she was supposed to be on top of a shipping barge in the original artwork.

SOS is SZA’s album in five years and also her first No. 1 album on Billboard 2022. It ranked fifth among 2022’s biggest album releases and debuted at 318,000 units. This broke the record for the largest streaming week for an R&B album.

Before SOS, SZA had released three singles: “Good Days,” “I Hate U,” and “Shirt.” The first two had also peaked within the top ten of the Billboard Hot 100.

The album had been developing for quite a while, as SZA sporadically released songs over a two-plus year period while she kept improving on her album and delaying release dates.

At the end of a teaser video she released on her 33rd birthday, she dropped a message written in Morse code. It was translated to S.O.S. by fans and quickly shared on social media.

On November 16, 2022, SZA confirmed the album would be released in December and also admitted feeling stressed about meeting the album’s deadline.

She made a guest appearance on Saturday Night Live and promoted the album on December 3, 2022.

Metaritic assigned SOS a rating of 90 out of 100, while Julianne Escobedo Shepherd named it “Best New Music” and called SZA a generational talent.

Other reviewers called it cohesive, organic, and phenomenal. It’s safe to say that critics and the public alike loved SZA’s new music.

“Time to have my ears blessed for an hour straight, so excited!!!”

To the surprise of many, SZA said SOS would be her last album.

“The US star’s first album in five years – and her last ever, she says – is sprawling, superb, and rarely puts a foot wrong.” –NME

“Her last ever? What a bizarre time to announce this. Someone get this woman some shrooms.”

Many fans were skeptical upon the announcement, however, and compared SZA’s case to other singers who claimed they’d retire and did not fulfill their promises.