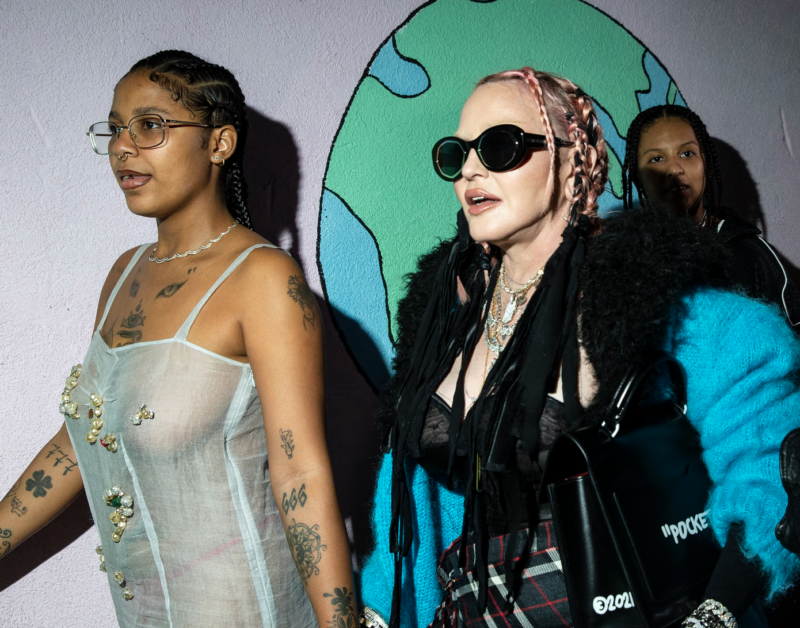 Never too far away from the eye of the media, Madonna has created new controversies by once more passionately kissing Tokischa at New York fashion Week.

The celebrities were in the front row watching the models of the Marni brand.

In many ways, Tokischa is a modern version of Madonna. Her songs speak about the realities faced by women of lower incomes and opportunities in a third world country, while also commiting the grave sin of expressing openness towards sex.

Tokischa hails from Puerto Plata, Dominican Republic, and has made a name for herself due to her controversial, hyper-sexualized lyrics in a conservative culture.

Being a woman of color singing about enjoying sex and all the dimensions of pleasure it entails doesn’t ring well in a country where religion still has a big say on most decisions.

On the other hand, Madonna, the Queen of Pop, pushed the boundaries of songwriting by using sexual, political, and religious themes.

They promptly exchanged glances and kissed each other on the lips for several seconds.

The clip sparked many reactions across social media. As expected, both women were praised and criticized in different ways. Tokischa, a woman of color hailing from humble roots, was praised for reaching fame despite having the usual roadblocks of a minority artist from a third world country.

She was also attacked for her humble beginnings “she got a Sugar mommy”. Madonna is 64 years old, while Tokischa is only 26.

On the other hand, Madonna, “has one leg in the grave and doesn’t stop making a fool of herself”, referencing how NYFW isn’t the first venue were both singers were spotted sharing intimacy on-screen.

They had also shared an intimate moment during a concert performed by Madonna during the Gay Pride month celebration.

Madonna’s also preparing a new version of her song “Hung Up” with the Dominican singer.

The singers have shared an intimate friendship, that goes beyond media spectacle, as they’ve spent the last couple of months sharing pictures of them together at events and concerts.

The kiss reminded fans of Madonna of the 2003 VMAS three-way makeout between Britney Spears, Christina Aguilera, and Madonna.

For some reason, fans have speculated that the two are dating.

While not out of the question, it seems more like the kiss was meant to draw attention towards their upcoming collaborations than an actual relationship, especially considering how much it would endear Madonna to younger audiences following the Dominican artist.