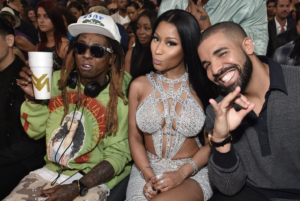 The Young Money reunion schedule for 2022’s OVO fest had been temporarily suspended due to Drake being positive for COVID-19.

The act took place at Budweiser Stage less than a week after suspension and served as the ending of the first OVO Fest in two years.

Ignoring how Drake could have possibly tested negative so fast, the act was exhilarating, being labeled a “triumphant homecoming” by Rolling Stone.

Those who went to the concert mentioned how it was a nostalgic trip through the musical throwback lane of the 2000s and 2010s, the apex of Young Money Entertainment’s music.

Fans showed up early to the Lake Ontario venue despite the afternoon’s heat to purchase overpriced, limited-edition merch from the event that will no doubt fetch a higher price on resales afterward.

At first, the audience was growing restless due to a late start. A video message suddenly popped on the screen saying, “Unfortunately, Lil Wayne has run into problems over the border.” Prompting widespread whining and complaints, and then a second message, “LUCKILY, DRAKE RUNS THE BORDER”.

Cue Drake appears on stage. The show had guest appearances by Lil Wayne and Nicki Minaj.

At one point, Drake paused the show to reflect on his first hometown show in three years, referring to OVO Fest:

“It’s been a long time since we’ve been here and been able to do this together. First and foremost, I just want to say tonight I got to stand in a crowd and watch two of the greatest musicians of all time. I’m so grateful. I’m so grateful to be a part of that team.”

Nicki Minaj’s ensemble featured fan-favorite songs such as her iconic “Super Bass,” “Feeling Myself,” “Did It On’em,” and “Beez in the Trap”. Lil Wayne took the stage at that moment to remind everyone of how he assisted Drake in growing his career.

Lil Wayne was the artist who gave a young Aubrey Graham, better known for his role as Jimmy in Degrassi than for his music, his debut in Young Money Entertainment.

Lil Wayne founded the legendary record label in 2005, and despite frequent changes in its management, its members, past and present, still remain fond of their fellow artists. The reunion reminded fans why they ruled the world of hip-hop.

“I want you to know that standing in front of you is the one responsible for the best thing ever to come to Canada.”

At the end of the event, Drake gave Wayne flowers and recounted a couple of memories of where he got on Wayne’s tour bus, and the rapper gave him $30,000.

The event was emotional and moving for Young Money Entertainment fans and Drake.